When I sat down in front of my plate, the spaghetti and sauce were steaming.  I hate burning my mouth with intense passion, so there was no way I was going to eat it like that.  So, I leaned over and blew on it to cool it down.

My Mom looked at me like I was insane.

Mom: "I don't think that does anything."

Mom: "I don't think blowing on you food cools it."

We have had this conversation before.  I still don't get what's confusing about blowing on your food to cool it down.  It works.  People have been doing it for millenia.

Mom: "I just think you're wasting your time.  It doesn't do anything."

Me (growing angry): "How?  What?  When it's cold outside, do you feel colder when the wind blows?"

Mom: "Yes, but that's when it's cold.  I don't think it does anything when it's hot like that."

Me (growing increasingly frustrated that she is impervious to my logic):  "But it works when it's hot too, right?  When it's like 90 degrees out, isn't it better when the wind picks up?"

At this point she goes back to eating.  However, she has not agreed to my point, so I can't let it go.  I can never let it go if I am obviously right.  I NEED the other person to not just agree with me, but understand WHY I am right.  You can't placate me with a quick concession - that's not good enough.  I need to know that you KNOW that my logic is correct.  It's not that I'm correct.  It's that something is wrong.

Me: "No. That is unacceptable. It's getting cooler. Look! It was steaming, then I blow on it, now - no steam!"

She looks at me and shrugs.

Mom: "It doesn't do anything."

Alright. This had gone on far enough. Now it's time to bring out the SCIENCE! 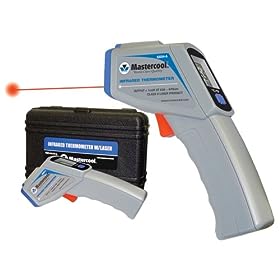 In the fall, my Dad was complaining about how the laundry room was always cold.  He thought that there may not be insulation in the walls.  So, as a Christmas present I got him (really me) this completely awesome infrared thermometer. You point it's laser at something, pull the trigger, and it tells you the temperature of whatever surface it's pointed at.  It has solved countless arguments and is also totally fun at any time of day.  (For instance, I pointed it at the back of my little sister Allison's neck and said aloud, "Hmmmm.... 86.3..."  When my other sister, DD, asks me what 86.3 is, I reply "86.3 is the skin temperature of a booze-hound."  Hysterics ensue.)

So, back to the spaghetti argument.

I scream, "That's it!" and leave the table.  I hunt down the infrared thermometer and bring it to the table.  The only problem is that now my spaghetti isn't hot.  So I march over to the sink and the rest of the spaghetti still left in the strainer.

I lean over and blow on the spaghetti for about three seconds.

Mom: "Stop it!  No one wants you to spit all over the spaghetti.  Someone else is going to eat that!"

Complaints like this are the last refuge of those who fear the truth.  She was no longer attacking my idea, because even though she would not admit it, she knew I was right.  Whenever people stop attacking your ideas and start attacking you, you've already won.

I walk over to the table.  A bad mood has now settled like an ominous cloud over the table.  I am undeterred.

I put the thermometer on the table and take my seat.

I then pick up my fork and begin eating again.  My spaghetti is no longer hot.  It is now just right.

I have no idea how people can stand living with me.